“Scrambling”, when used in conjunction with hiking, usually refers to off trail travel over exceedingly rough ground such as boulder fields, or non-technical climbing where the use of hands is required. 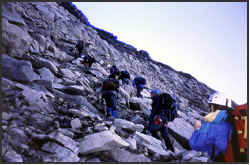